Dividing Fractions in the Real World

Let me preface this by stating that I learned the trick for dividing fractions, simply multiplying one of the terms by the other's inverse, a long time ago. However I always find things more understandable when I have a good concrete example of how something works. My girlfriend is very strong in math, and wants to be an elementary or middle school math teacher, and she gave me the following example to think about. Say for example you have 4 quarts of ice cream, and you want to split it up into cups that each hold 2/3 of a quart. First you take 2/3 of each quart of ice cream, leaving 1/3 quarts in each ice cream container. Since you started with the 4, you have now filled up 4 cups. You have four 1/3 quart portions left and you want to fill up 2/3 quart cups with that portion, so two of those 1/3 quart portions will fill each cup, meaning two more cups are needed.
I thought it was a very good way to think about division. Perhaps I was taught an example like that in school, but all I remember was the simple inversion trick. I didn't get a really good understanding for what I was doing.
Another thing that helps with fractions is to change what I subvocalize when I see one. I was taught to think "two thirds" when I see 2/3 for example. If on the other hand I think "out of three parts, take two", when I see 2/3, I get a much better understanding for what the fraction actually means.
Posted by John St. John at 7:22 PM No comments:

fonolo 4 Android: A look back at Software Engineering 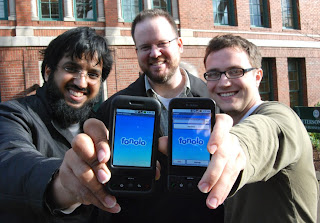 This term taking Software Engineering with professor Anthony Hornof (credit him for the image to the right) was a great experience. My team developed an application for the Android phone which we subsequently distributed on the Android marketplace, and is downloadable in the US on any Android based cell phone. Learning how to develop this type of application, with the end user in mind, and also working on managing the team was definitely a valuable experience in the long run. If any future developers are interested in checking out the source code for this application, it is available at http://code.google.com/p/fonolo4android/ Perhaps I will crank out another Android based application in my free time in the near future.
Posted by John St. John at 1:51 PM No comments:

John St. John
Santa Cruz, California, United States
I am currently an graduate student in the field of computational genomics at the University of California Santa Cruz. I am currently working in Dr. Ed Green's lab on the American Alligator genome, and using comparitive transcriptomics to discover which genes are first triggered by temperature to determine whether the developing alligator embryo ends up male or female.

John St. John's Blog by John St. John is licensed under a Creative Commons Attribution-Share Alike 3.0 United States License.
Based on a work at blog.johnstjohn.com.
Permissions beyond the scope of this license may be available at http://www.johnstjohn.com